EventON 2.6 and other updates

EventON 2.6 version update is now up for grabs from codecanyon https://codecanyon.net/item/eventon-wordpress-event-calendar-plugin/1211017/ Along with this we have already released updates to ActionUser, RSVP and Tickets addon. Lets see what all was new with this big number updates!

2.6 have a lot of fixes for eventon that were nagging users and we took the time to address those issues. The biggest addition is the tiles layout with image and event details under the tile box. 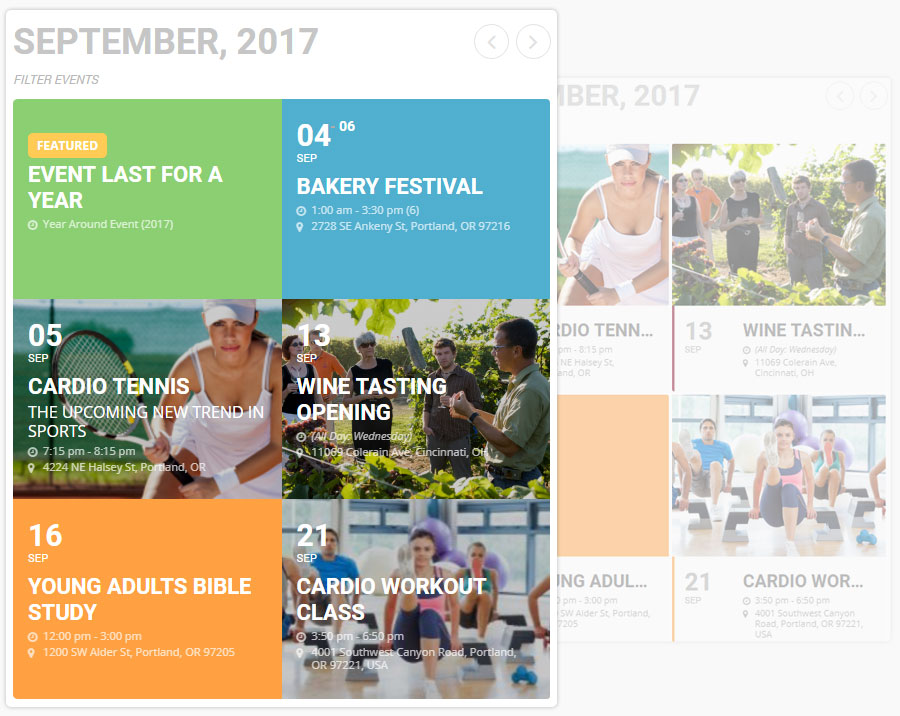 Location and organizer are now supported officially via shortcode generator for filtering events. Apart from this there are several code improvements and additions that have been done in 2.6 to support speed improvement to calendar and for future extensions.

Event submission form is now generated using AJAX and so is the eventmanager, which use AJAX to load the form into page — adding a much needed improvements to user experience. This update also have several other bug fixed as well.

This update to RSVP have lot of bugs addressed, there is not any major improvements. One of the biggest improvement is download attendees CSV file is now open to pluggable functions to add other RSVP fields into CSV file. But we are hoping to make improvements to RSVP in the coming months.

We have re-designed the successfully added to cart message with a more subtle design. Tickets can now show the next available event with tickets on the eventCard (for repeating events with ticket sales) You can also set your custom WC ticket product title name structure from settings. This was a setback for several of our customers in the past, not being able to customize the ticket product title — now you can set it to always use same structure.

Apart from this there are several actionUser integration updates and bug fixes comes with tickets 1.6

We are so glad to have gotten this update out of the door, as I know several of you guys were waiting for the updates. We have done hours and hours of testing on these updates and really hope we covered all the bugs.

Now that these updates are out of the way, we are going to be working on several new and amazing addons that we were holding off on during these updates. To give a sneak peek into what we are working on: We are going to expand our reach into ticket sales side of things for eventON and really going to push for advanced ticket sales related features. ActionUser side of things will also be getting several new features that will really help our customers generate revenue using eventON.

Going forward we really want to help you — our eventon customer — automate your day-to-day eventON operations (as much as possible) and help you generate revenue using eventON in ways that is appreciative by both you and your customers.

As I have promised some of you, we have released the new eventon 2.5.5 version update earlier this week. Lot of bugs have been address in this version you can check the complete log here.

Today literary was an updates day. We have released updates to big 3 addons:... [...]